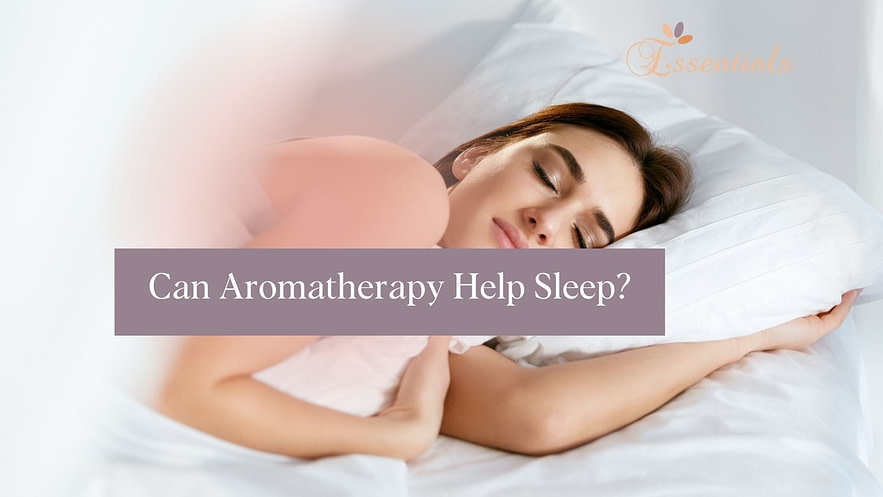 Essential oils are very helpful for insomnia and there are lots of easy and effective ways to use them.

No time to read it now? No problem, just click here to download it as a PDF

The longer insomnia has been going on, the longer it will usually take to see results. But, because everyone is different, there are lots of exceptions.

I had a client who came for a course of aromatherapy massage. She was a terrible sleeper, she slept on average an hour and a half a night and some nights she had no sleep at all.

She had small children, and I honestly don't know how she kept going. After the first massage, she said she had slept for three hours, which was fantastic for her. That continued for a couple of nights, and then it reduced to an hour and a half.

She came back the following week, and she slept for four and a half to five hours a night for a few nights, which was amazing. Again, it reduced towards the end of the week, but the more massages she had the better she slept until she was sleeping an average of six hours a night.

We need essential oils that are:-

Bergamot (Citrus bergamia) (the “Little Oil of Stress”) is calming and uplifting at the same time, so it's great for insomnia.

Since my son was a little boy, he always asked for Bergamot when he couldn't sleep, and he still finds it great, over 20 years later.

Lavender (Lavandula angustifolia/Lavandula officinalis) is calming and balances the mood.

Ylang Ylang (Cananga odorata) controls the amount of adrenaline in the body. It also regulates the heart rate and breathing. I call  Ylang Ylang the "emotional crutch" and I use it for panic attacks, severe anxiety, and long-term stress.

How to use the evening recipe

Aromatherapy inhalers are great. 10 drops of essential oil are recommended for mental/emotional conditions, so 3 drops each of Bergamot and Lavender and 4 drops of Ylang Ylang would be lovely. For pregnant women, use Neroli instead of Lavender.

Waft the aromatherapy inhaler under the nose for a few minutes and repeat several times an hour if needed. Despite its Vick's like shape, don’t be tempted to insert the inhaler into the nostrils.

Use one drop each of Bergamot, Lavender and Ylang Ylang in a burner or diffuser.

For pregnant women, replace the Lavender with Neroli.

Don't be tempted to use more because you can't smell it. It's like cooking, your nose becomes used to the aromas, and you don't smell them after a while, but someone else coming in will smell them. And the oils will work their magic whether you consciously smell them or not.

Don’t use undiluted essential oils in the bath, they don’t mix in water, and they can irritate, or even burn, the skin.

How to make the bath oil

For the base use:-

I was very surprised when I heard of using milk in a bath, and I wondered if there would be an odd smell from it. But, once in the bath, the milk completely dissolves, there is no aroma and no residue.

How many drops of essential oil?

When the bath oil is made in milk or shower gel, you need to use it the same day. When it is made in vegetable oil, it will keep for at least 3 months, as long as it’s stored properly in a dark glass bottle with the lid on and kept in a press or drawer away from light and heat.

Aromatherapy inhalers will last about 3 months as long as they are stored away from light and heat.

Don't use Bergamot on skin that will be exposed to bright sunlight or a sunbed within 48 hours.

Don’t use Sweet Almond Oil for anyone with a nut allergy, Grapeseed is a good alternative.

Essential Oil Recipe For The Morning

Most people think stimulating aromas will help fatigue and use oils like Rosemary, Basil and Peppermint. However, if someone is deeply fatigued (as they will be if they haven’t slept properly in a while), they need to be nurtured not stimulated.

Lemongrass (Cymbopogon citratus) has a strong lemon aroma. This is an oil that refreshes initially, but later acts as a sedative in the body.

When I first heard of Lemongrass being described as sedating, I was sure that it was a misprint in the book I was reading. But then the next book I read had the same misprint, and so did many other books.

I was very confused until I did clinical aromatherapy training with Rhiannon Lewis, (the founder of Botanica) and she explained that the body can change the oils, just as the oils can change the body. So, while the aroma was very refreshing, even stimulating, once in the body Lemongrass becomes a sedative. Which makes it a great oil to use for insomnia in the morning or afternoon.

For pregnant women, replace the Roman Chamomile with Neroli.

Use one drop each of Grapefruit, Chamomile and Lemongrass in a burner, diffuser or other room methods.

For pregnant women, replace the Chamomile with Neroli.

Don't be tempted to use more because you can't smell it. It's like cooking, your nose becomes used to the aromas, and you don't smell them after a while, but someone else coming in will smell them. And the oils will work their magic whether you consciously smell them or not.

For adults who are not pregnant, frail or convalescent and who don’t have sensitive skin, add one drop each of Grapefruit, Chamomile and Lemongrass to a teaspoon and a half (7.5 ml) of shower gel or liquid soap.

For children under 12 years old and over one year old, or anyone with sensitive skin, add one drop each of Grapefruit and Chamomile in 2 teaspoons (10 ml) of shower gel or liquid soap.

For pregnant women, add two drops each of Grapefruit and one drop of Lemongrass to 3 teaspoons (15 ml) shower gel or liquid soap.

How many drops of essential oil?

Don't use Roman Chamomile for pregnant women, Sandalwood is a good alternative.

Don't use Grapefruit if you intend to be out in bright sunlight or to use a sunbed within 48 hours.

Don't use Lemongrass on sensitive skin, even diluted.

After using essential oils for over 20 years and teaching for almost as long, I'm still excited at just how powerful they are.

Essential oils are so effective and so easy to use, and I'd love everyone to benefit from them, whether they are aromatherapists, holistic therapists or essential enthusiasts who want to use them for themselves, their families and their friends.

I have trained several hundred successful aromatherapists, created CPD courses which I've taught in person and online, and I'm the author of a book called " A step by step guide to using aromatherapy and essential oils for common ailments"